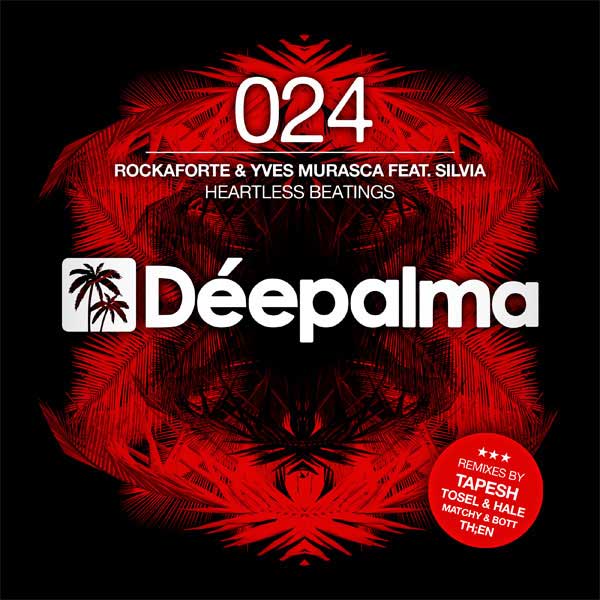 Italy’s Rockaforte teams up with label boss Yves Murasca and Silvia for ’Heartless Beatings’, including a stellar Tapesh remix.

The first one and a half years of existence have been amazing for Munich based label Déepalma. After already having released 22 wonderful singles/eps, a few samplers and four convincing mix albums since its establishment in April 2013 Déepalma Records is now coming up with a truly big Release called “Heartless Beatings” by Italian whizz kid Rockaforte who teamed up with Déepalma label boss himself Yves Murasca.

Although quiet young and fresh in the electronic music scene Rockaforte has already had a steady string of quality releases via Switzerland’s Indiana Tones as well as renowned LoveStyle Records. He is a musician par excellence bringing in true excitement about how his career will develop in the next couple of months. Yves Murasca is in the biz since almost a decade and had been remixing a serious number of big names so far (Barbara Tucker, Bob Sinclar, Jean Claude Ades, Tom Novy, Milk & Sugar or Chris Lake to mention a few), as well as releasing a number of well known Originals on top label Milk & Sugar Recordings and his own Déepalma imprint. Not to mention his frequent dj gigs around the world including Ibiza, Barcelona, Moscow or even Brazil, big festivals like German Nature One, Amsterdam Dance Event or Streetparade in Zurich as well as regularily touring the metropoles of his home country like Hamburg, Nuremberg, Munich or Frankfurt. At renowned club Pacha in Munich he is still doing clocklike shows several times a year and in Ibiza he has played at legendary club Bora Bora.

Next to a beautiful laid-back Original version by Rockaforte & Yves Murasca Déepalma Records managed to create a super ace Remix package. On the number spot man of the moment TAPESH who obviously needs no bigger introduction. His production output on Bunny Tiger, Hot Creations, Mobilee or Suara, as well as his summer residency at Ushuaia Ibiza make him count to the most sought-after names in the current scene. Spot 2 goes to Greek Déepalma artists and amazing talents TOSEL & HALE, hosts of the famous weekly Spirit Soul podcast. Their releases on Spirit Soul / King Street Sounds / Sleazy Deep / StayFly / Kiez Beats and of course Déepalma are displaying a clear trend to bigger success in the near future. Last but in no way least on Spot 3 the label is serving you a deep techy treatment by Mainz/Germany based newcomers TH;EN, MATCHY & BOTT. As quality sound engineers and close friends of top act Teenage Mutants they are meant to become one of the big next German export hits.